We(I and a friend of mine: Gloria) arrived at Mobolaji Johnson train station located in Ebute Metta, Lagos, Nigeria on a beautiful Saturday morning. We had looked forward to the trip and we were excited. 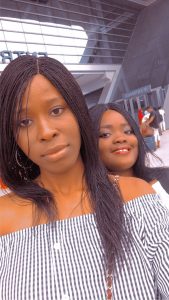 The trains have an upper part where luggage’s can be kept, a nurse on board going round to ensure everyone is okay, a cabin crew(they make a stop at Papalanto train station to change cabin crew), a water dispenser etc. The train station in Lagos is really beautiful and it was well organised, from the queue to purchase tickets (waiting area was also spacious, neat and comfortable) to the point of boarding the train. As at the time of writing this article; the cost of Economy train ticket is N2000 naira and business class ticket is 3500 naira going to Abeokuta, while coming back from Abeokuta to Lagos,  Economy ticket was 2000 naira, business class was 3500 naira. Confirm current prices when you want to go as they usually change. 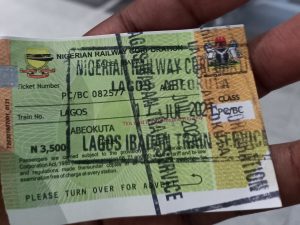 We were glad and happy to see how well the train station is working and we hope the standards are maintained.

The train station in Abeokuta was still under construction. 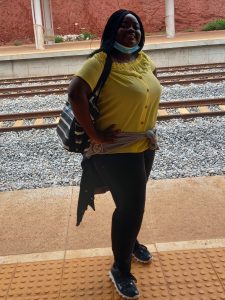 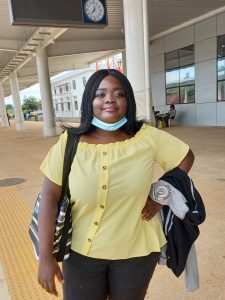 We booked and paid for a tour guide for our trip, she delivered excellently and did an amazing job. 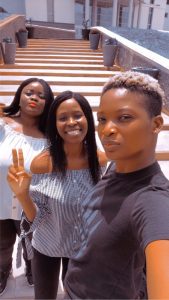 She was waiting for us at the train station and welcomed us with yummy, sumptuous, delicious pasta, turkey, sausage, veggies from one of her businesses: The pasta zone. We enjoyed our meal. 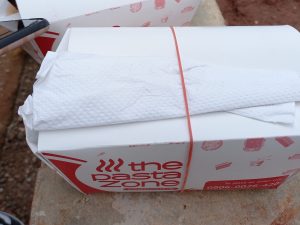 We used a cab service during our stay, booked by our tour guide. We proceeded from the train station while on our way to oopl, our tour guide showed us some places like: Okemson, which is the Secretariat in Abeokuta and our first stop was;

Oopl (Obasanjo presidential Library): really love the work that has gone into the structures here. Pictures and videos are not allowed in most part of the Interior facilities and it will be great if the rule can be adjusted because they were many memories we will have loved to capture and look at them at other times. 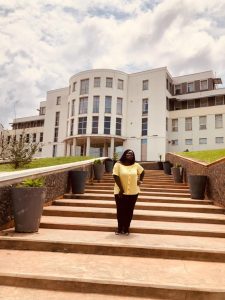 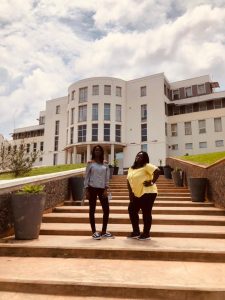 Some of the staff at oopl took us on a tour of the facility…oopl is the 1st of its kind in Africa and ranks 14th in the world. We were told the stories about each of the Items we saw. We saw Bailey Bridge:Dam 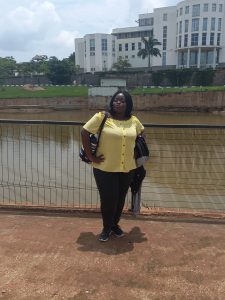 Then we went into the gallery were we saw Bicycle, various cars, an helicopter, a ship which had been used by former President Obasanjo.

We proceeded to another building were we saw a chart showing the different donors, sponsors that contributed to the formation of the facility, how much they contributed and they were grouped under different categories: Gold, Diamond etc.

On the  first floor; there were two sides right and left we were shown a replica of the Prison former President Olusegun Obasanjo stayed in, sporting activities he loved, (we watched the second documentary here while the first one we watched it at the theatre), there was a section dedicated to Late Mrs Stella Obasanjo(wife of the former President) which showed Initiatives she was involved in during her life, places she travelled to and more.

We also saw tools former President used in his farm, his military uniforms, school certificates and much more. We saw other Items of the former President, artifacts etc.

We also saw the actual seat President Obasanjo used during his time as President in Aso rock, the table was a replica while the seat was the actual one.

It costs 3000 per person for the half tour which took about 2 and a half hours.

Kuti heritage museum: 1st generation and 2nd generation of the Kuti’s museum are two different buildings in the same compound . Our tour guide did the story telling for the 1st generation building while a staff of Kuti Heritage Museum did a tour of the 2nd Generation building. We saw pictures of the different members of the Kuti family. We saw their living room, dining, bedrooms, Kitchen, bathroom etc. It costs  1000 per person. 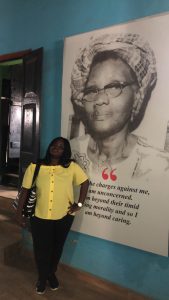 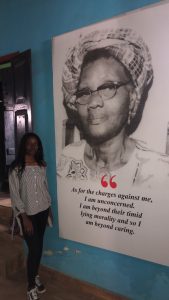 Alake palace: We saw only the exterior but not the interior. 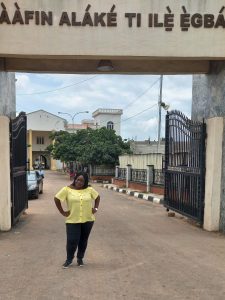 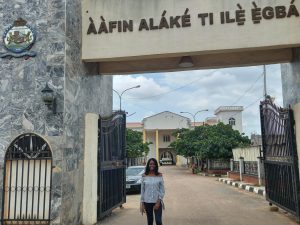 Centenary hall: We saw only the exterior but not the Interior. Part of the music video Fia by Davido was shot here. 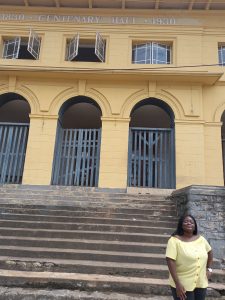 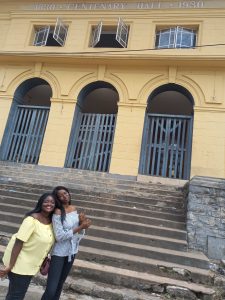 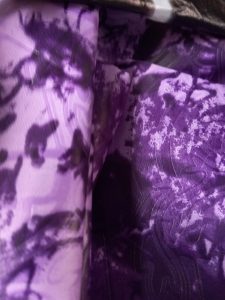 Olumo rock: It houses an art gallery as well. It costs 1000 per person, they didn’t have a single 1000 ticket when we visited so we bought 2 5oo naira tickets per person.It was my  1st hiking experience and I was so happy, we began climbing the rock, our tour guide was showing us the routes to follow and we took some breaks in between; as we were climbing the rock, It began to rain, I was afraid of slipping and falling; because there are times there have been no obstacles and I have fallen…but I was determined to get to the top rock. (We saw the first mosque in Abeokuta and a general view of Abeokuta from the top of the rock).Therefore, we continued the hike till we got to the top… Super fulfilling time. Check out my Instagram highlights, posts and reels for video on top of the rock and other awesome videos and pictures of the trip. click here to view my Instagram page. We also noticed there was a part going on at the outer space at Olumo rock. 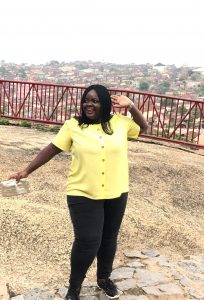 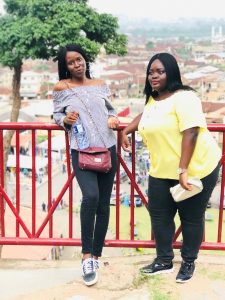 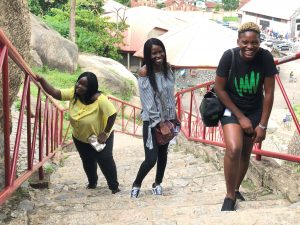 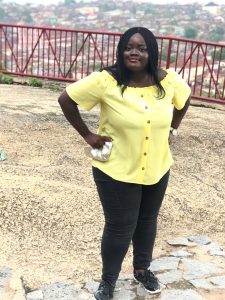 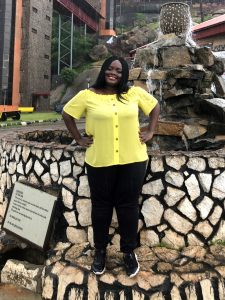 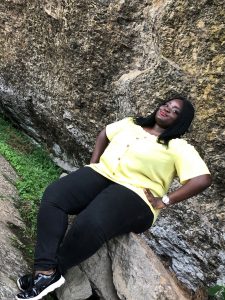 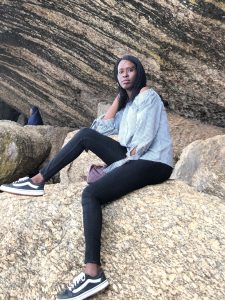 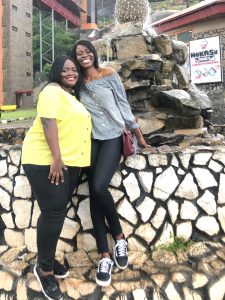 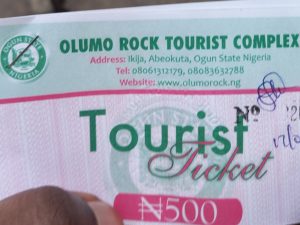 When we were done from Olumo rock, we proceeded to purchase Lunch. We had fire wood rice, plantain and assorted meat for Lunch from Halaga.

We got back to the train station a few minutes to 5 and we were told the train was no longer departing by 5:30p.m but 7:00p.m. We wished we were given the correct Information when we called to confirm. That could have given us an extra hour to explore. Nevertheless, we had an awesome trip and It was worth it.

Initially we wanted 2 days trip but  the train not yet operating on Sunday though we had thought they will start as at when we fixed our trip because we called severally to confirm, our tour guide also Informed us that most places in Abeokuta are not bubbling on Sundays.

We got copies our tour guides book: The Girl Power 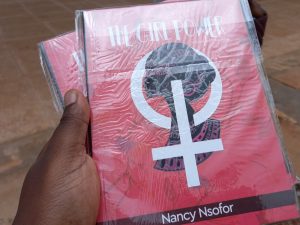 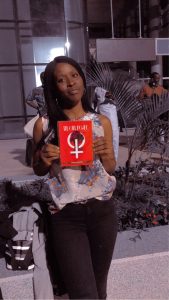 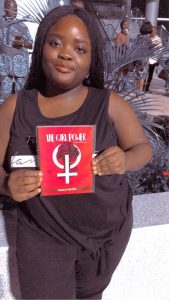 Please note that prices stated here are as at the time of writing this article, prices may vary at a later date so please confirm before proceeding for your trip.

Want contact of our tour guide Nancy? Please signify in the comments section and I will send it to you by mail.

Have you been to Abeokuta before? If yes please share your experience, If no will you love to visit?

9 thoughts on “7 Interesting Places to visit in Abeokuta, Ogun State”

View other posts below: